For several months now, Audrey as been beyond obsessed with copying the adults and occasional older children around her. Since she spends most of her time with me, she ends up trying to copy me the most. I had previously tried to waylay her attempts at involvement in whatever I was doing by promising her that I'd come play with her things just as soon as I had finished with mine. Then it hit me: why can't she do whatever I'm doing, with me? Thus my revelation. As long as the task at hand isn't dangerous, time-sensitive, toxic, or way beyond her skill level, I have been letting her do whatever I'm doing. She has been loving it. Loving it!

Two of her favorite big-girl activities are sweeping and cooking with me. I've had to get over myself with the urge to control messes, and accept the fact that some of the best learning activities go hand-in-hand with messes; it's no big deal to make a mess because messes can be cleaned up! I am proud of myself for this concession, and we've had fun with messy and not-so-messy activities since then.

The other night, we were making flat bread to go on the grill, and Audrey was helping... 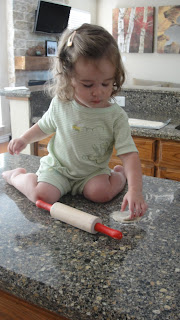 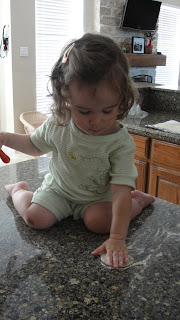 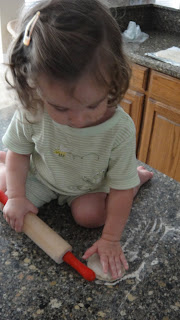 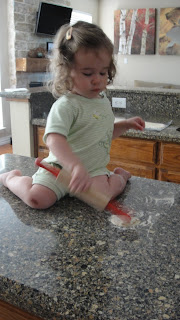 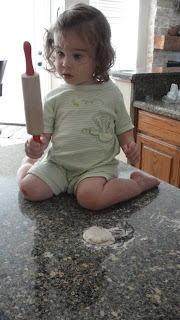 Studying her favorite part of the whole operation
She really enjoys doing the things I do, from gardening to cooking to working on the computer, and everything in between. Who knows? Maybe I've stumbled on the best way to make her look forward to the chores she'll have one day :)
Posted by Courtney at 7:06 AM