This week, Audrey got a bed pillow in her crib. She's always had 2-3 stuffed animals in there with her, along with her "bay-tee" (blankie), but never a pillow. We were worried that, since Audrey sleeps on her tummy almost all the time, a pillow might pose a safety problem. However, I had noticed that very often when I'd go to get her up in the mornings or after naps, she'd be sleeping on her blanket, which would be all balled up and tucked under her head like a pillow. I did a little research and found the NoJo Toddler Pillow, and decided it was time.
After removing the pillow case, cutting off the tags, and washing it, we tried it out during a nap time. Audrey was thrilled. She got a "pah-noh" in her bed, just like Mommy and Daddy have in their big bed, and she was the happiest kid ever. She spent about 5 minutes sitting up, fluffing the pillow, and emphatically laying back down on it with a satisfied "Aaaahhh!" She then fell asleep on it... and when I say she fell asleep on it, I mean she fell asleep with her whole body crammed on to the pillow.
The next day at nap time, she went right to sleep with just her head on the pillow, and slept the whole nap time oriented in one direction in her crib, with her head nestled on her pillow (which is very unusual for her; she tosses and turns like a pinball when she's sleeping). After 2 days with a pillow during nap time, we decided to let her have it at night, and she slept all night that first night with her head on her pillow, too. She's had it in her bed ever since, and she is one happy girl! Maybe this is the first step in training her to sleep in a toddler bed... who knows? 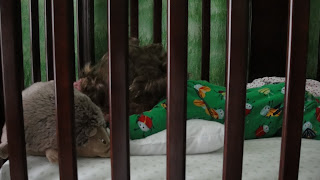 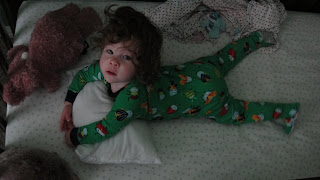 What we've seen so far is impossibly cute, though, and that one little pillow has made it almost exciting for her to go to bed, so we're all loving it!
Posted by Courtney at 8:15 AM 2 comments:

I'm happy to report that my little kitchen garden is coming along nicely. I have to take a moment to express how pleased I am with it's progress; there once was a time when my attention to a plant was basically a death sentence. Now, happily, I am sustaining almost everything I planted! Almost everything, you say? Yes, well, my chamomile didn't germinate, and I have since figured out I didn't treat the seeds like they needed to be treated. Never fear, though- I'll have chamomile next year, darnit!

One of my most favorite things to do in the morning (pre- Audrey waking up, post- coffee), is to walk out to my little potager squares and look for new sprouts, buds, and blossoms. It's hard to believe how quickly the aches & pains of building the raised beds have faded into the past! It's also quite amazing to compare the before... 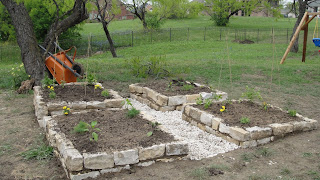 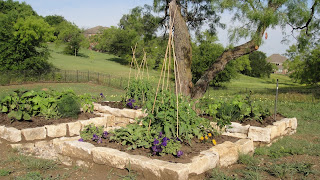 These are a few pics I took this morning of the garden and surrounding plantings, after it had been raining all night: 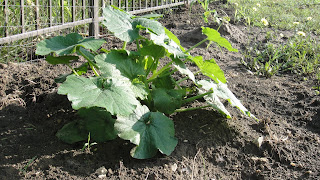 Zucchini growing by the back fence 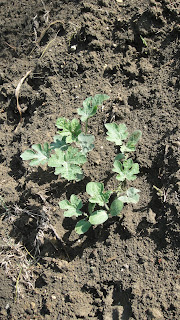 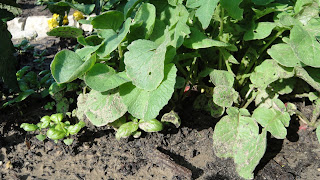 Radishes around a tomato plant, with baby basil growing under them 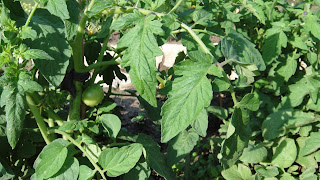 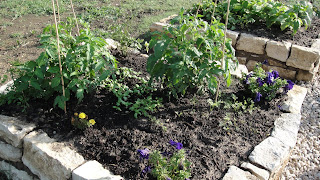 Tomatoes, marigolds, and soggy petunias, with basil and carrot sprouts 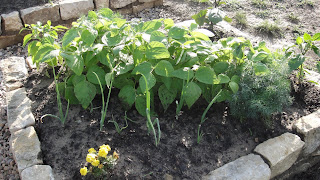 Bush beans, onions, dill, and marigolds, with an eggplant on one corner, and a jalapeño on the other 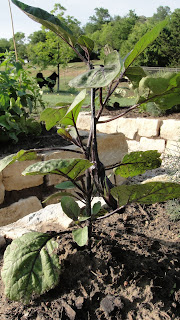 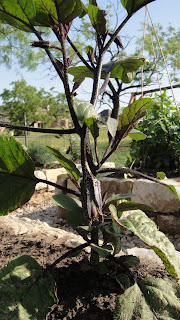 Eggplant #2, with another baby eggplant, not quite as purple 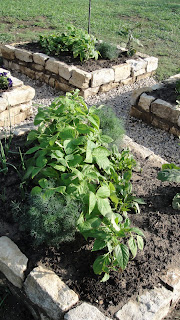 More beans, more dill, another jalapeño, spinach, and in the background, beets 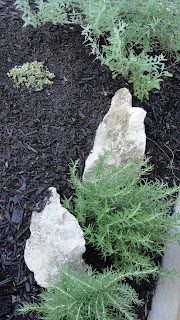 The herb garden, close to the house, with 2 kinds of rosemary and a patch of oregano 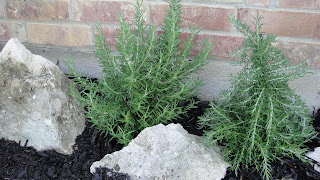 The rosemary... they've doubled in size since last fall 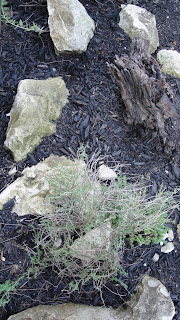 Thyme, with 3 garlic sprouts behind it
Posted by Courtney at 1:28 PM 1 comment:

Artist in the Making

I know there's a fine line between feeding your kid's natural talents and interests and over-booking and pressuring them in to activities that they may or may not want to do; I hope I can find a good balance, because so far, Audrey has shown such a wide variety of interests in all the arts... music, dancing, drawing, painting, and who knows? Maybe some day photography and sculpting. Who can blame her? It's in here genes! She is surrounded by fine artists and musicians... let's just hope she will be given the right opportunities when it matters, and her gifts will blossom and grow! 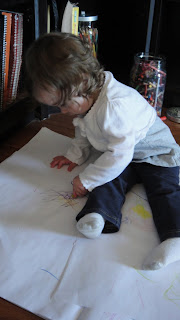 Audrey and her Crayons 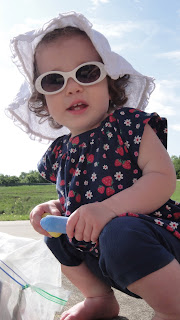 Sidewalk chalk in the driveway with Aunt KK 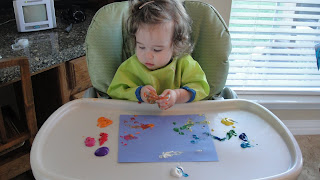 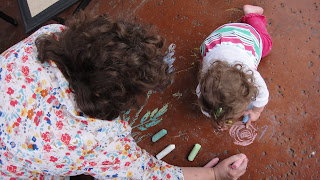 Drawing on the back porch with Mimmy
Posted by Courtney at 8:05 AM No comments:

Recently, I've been thinking about all the 'experts' out there with 1,001 opinions on letting your kiddos watch TV. It's been on my mind a lot; Audrey is beginning to show markedly increased interest in kid shows, especially anything including Sesame Street characters. Heck, sometimes she even likes to watch the commercials in between grown-up shows. It begs the question: how much TV is too much, if any?

Before Audrey was born, I got my hands on an article released by the AAP, which claimed it was vital to keep kiddos from watching TV before the age of 2, and that every hour parked in front of the TV could be directly correlated to delays in speech development (also supported by other docs and such from other sources). THEN I read about how no one knows for sure what the impact of watching TV is when it comes to young kids, and that you should be safe and keep them from watching any at all for ever and ever, amen. At the same time, I was bombarded with the supposed genius that is the Baby Einstein line. Hmmm.
Out of frustration, confusion, and ignorance, I vowed to keep the tube off around Audrey at all times, and went forward in to parenthood. Well, that was easier said than done. Once Audrey got past the 12-month mark, she really started showing more interest in the TV. Some say it's because of the bright colors, others say it's the noise and movement... Most say kids this young don't even comprehend what they're seeing, and don't understand that what's on screen represents something. However, soon after Audrey's one year birthday, I started putting on Sesame Street while she ate lunch, basically to see if there would be any impact at all. Let's just say she noticed.
From the moment Elmo popped up on the screen, she was riveted, and still is to this day. However, something interesting happened. She immediately picked up on his name, his color, and frequently, even what he's doing. She then picked up on most of the other main characters (the puppets, anyway), and very quickly could pick them out of her Sesame Street pop-up book along with the sounds they make (like, 'Count, ah-ah-ah'). Then one day when she was about 14 months, I noticed she was repeating letters that the characters were repeating (her first being the letter 'X'). It got me thinking...
After hitting the books and parenting websites a second time (now with a new point of view), I was able to find less extreme sources and studies, and it seems like the following are proving to be true, at least for us:
1. Letting your kiddo watch TV only stunts his/her vocabulary if you're letting them watch TV in place of interacting with them. Watching with them, repeating letters and colors, describing what you're seeing, and validating what they say about said show, all makes a big difference (vs. just parking them and walking away).
2. TV used as a babysitter all day is bad for your kid's well-being and development, but a quality show here and there as part of a well-rounded day can be a fresh perspective on what you've been teaching them.
3. As with everything, you have to take expert advice about TV-watching with a grain of salt, because every kid and every family is different.
That being said, Audrey now watches an episode of Sesame Street every day while she eats lunch, and she really gets a kick out of it. It helps her eat slower, and it helps her wind down before nap time. If I were told a while back that this would be part of her regular routine at 18 months old, I would have laughed in your face. Now, as I am so much wiser, I realize yet again- you can't judge until you're there, and even then, everyone's different; the only one that can make the right decision for your family is you. 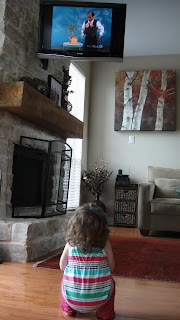 Audrey watching "Mr. Noodle" on Sesame Street right after lunch
Posted by Courtney at 7:46 AM 3 comments: