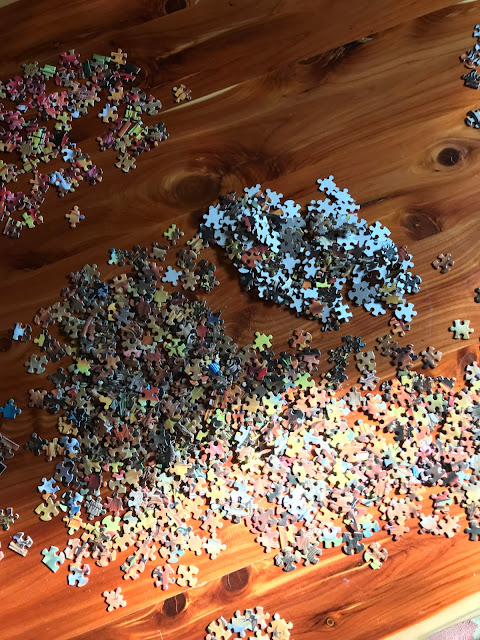 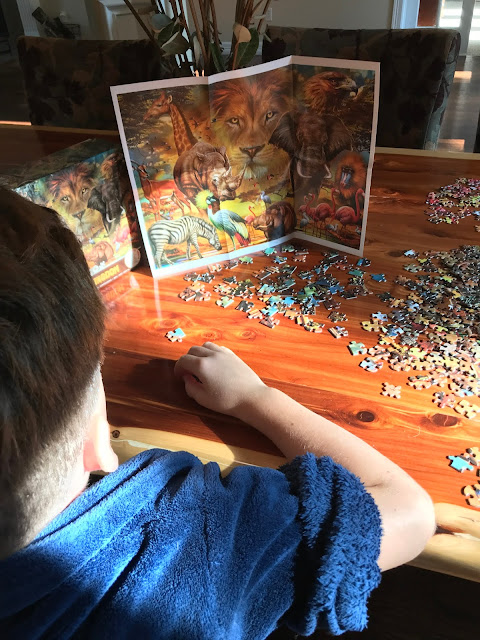 Our sweet neighbors surprised us this weekend with a gift dropped off at the end of our walk... a 1,000-piece puzzle featuring a beautiful collage of African animals. We found it the next morning and dove right in- still in pajamas- and spent almost eight hours assembling what has become the bottom edge of the puzzle. It's been a great diversion from our hibernating routine of chores, work, and bugging about getting on devices... and as the weather shapes up to be more of the same over-the-century-mark endless heat and humidity, we are feeling super glad for the diversion. 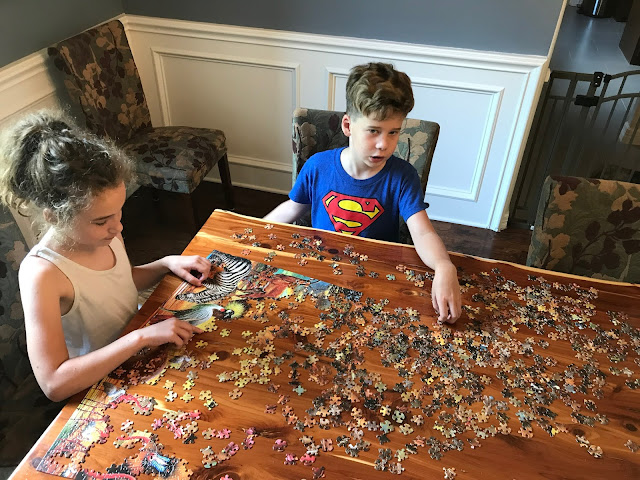 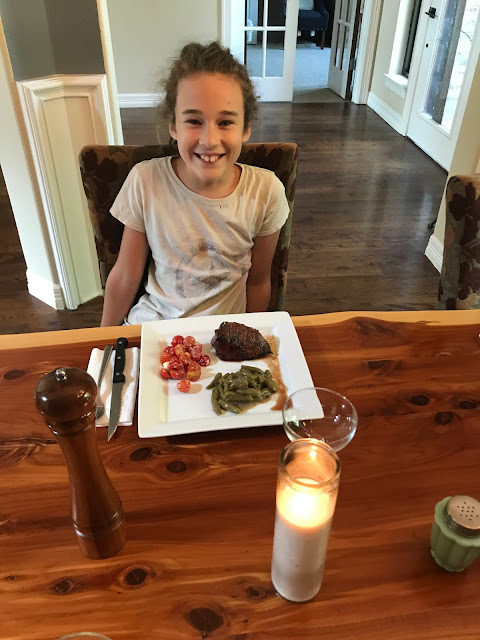 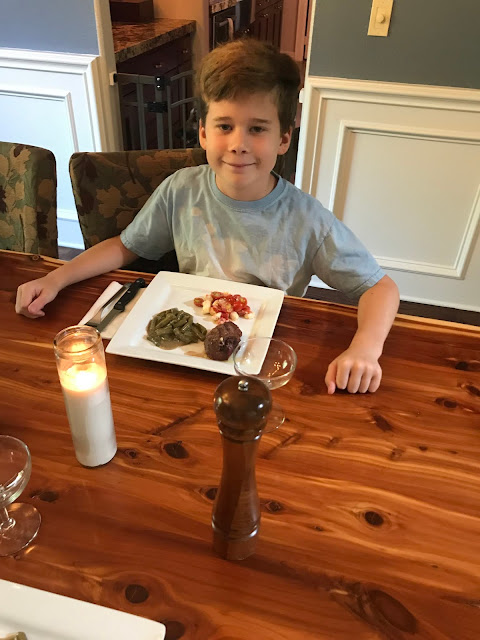 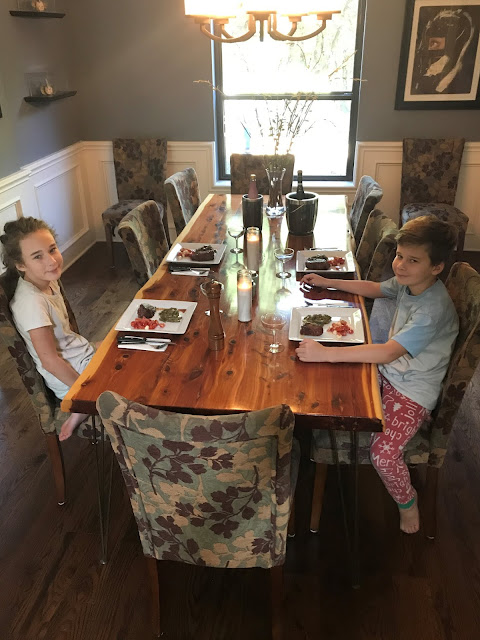 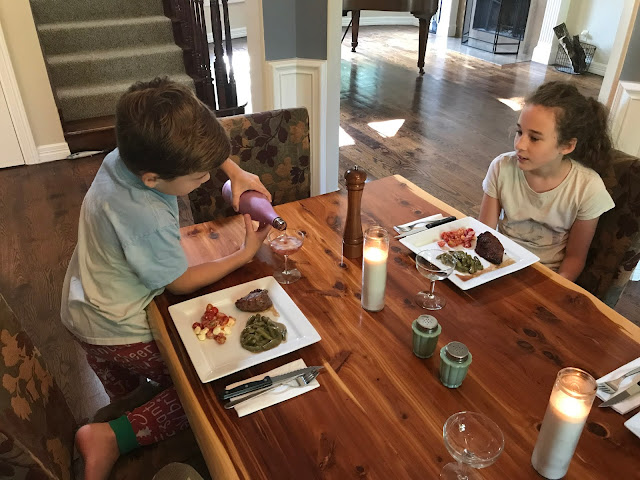 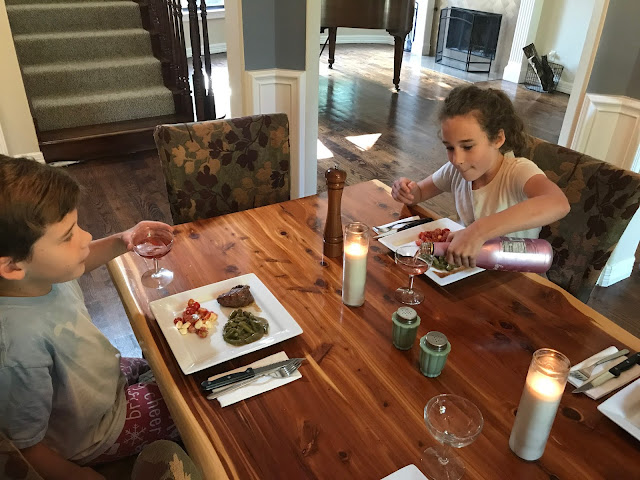 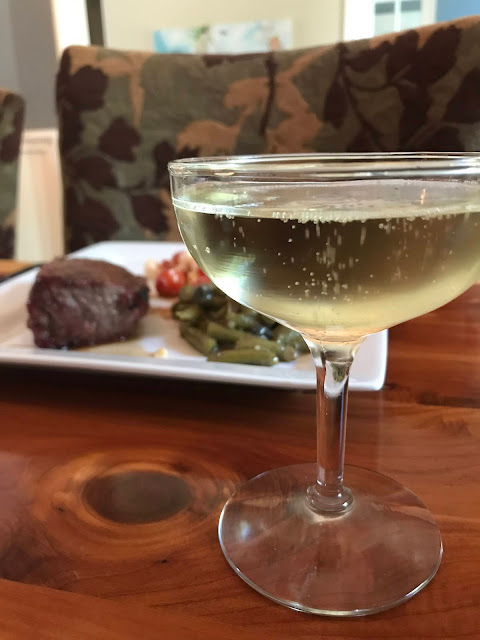 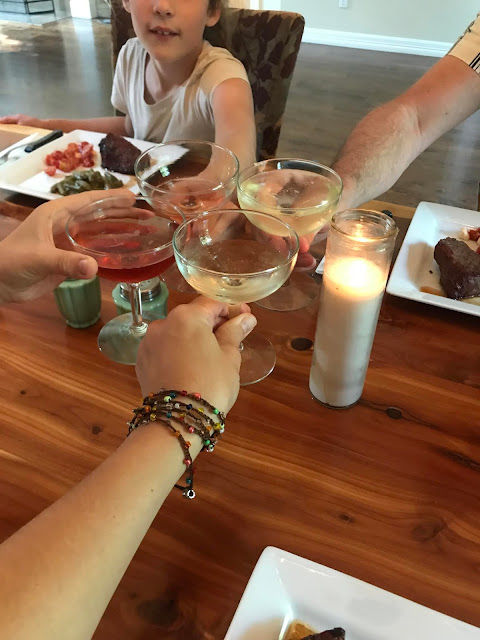 Cheers to seven years and many more!
Posted by Courtney at 10:00 PM No comments:

Email ThisBlogThis!Share to TwitterShare to FacebookShare to Pinterest
Labels: Holidays and Celebrations, Home

Everyone that has heard this story so far has said, "You're crazy." Maybe it's true... but then again, maybe all beekeepers are crazy... after all, we voluntarily suit up in layered long sleeves, pants, socks, boots, hats & gloves and go stand out under the sun for hours in the peak of the afternoon in July in Texas, so I guess I can see the argument.

However this little tale is a different kind of crazy. 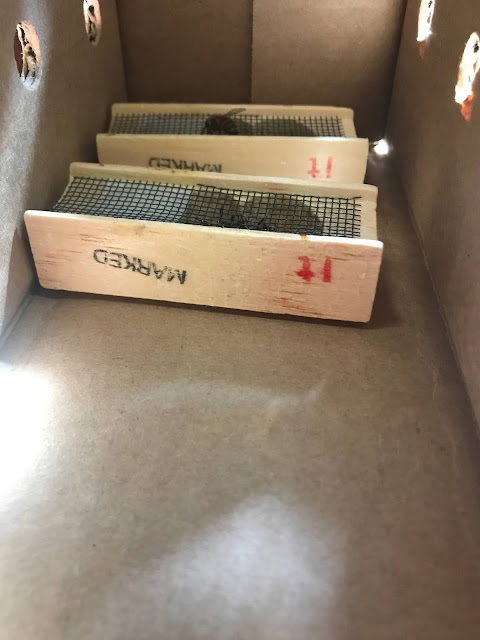 Yesterday I received two queen bees for a friend who couldn't be home to receive them himself; they're always shipped overnight and arrive hungry and thirsty and in need of immediate attention. Since I'm working from home, being available to be the bee-sitter until we could install the royals in his hives was no trouble at all, so yesterday morning there I was, taking videos of "pipping" and biding my time until they could go meet their new subjects.

That's when I noticed something on one of the attendants.

Side note: queen bees are always shipped with 3-4 attendant bees to groom and feed and tend to them, as they don't take care of themselves once their roles officially shift into egg-layer.

So anyho, while watching them eat the honey I'd smeared onto their screens, I noticed one of the attendants had a varroa mite tucked under one of the plates on her belly. 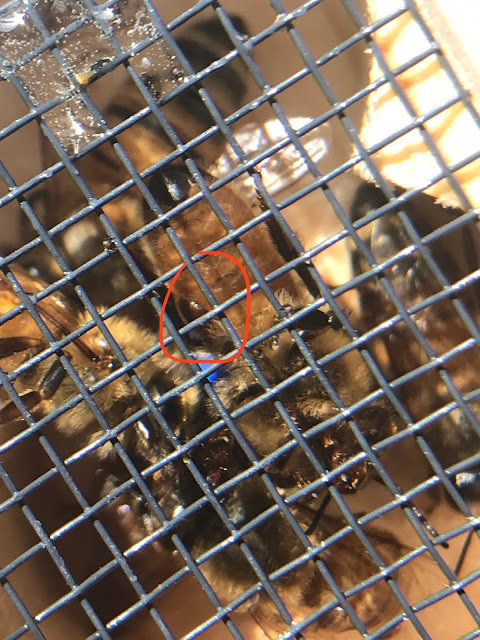 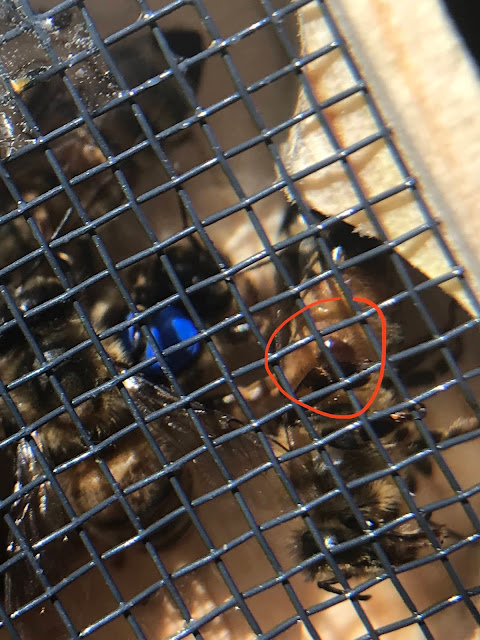 High-five to me for seeing/spotting it with just my glasses on, ha!

After forwarding the two photos above to some beek friends, however, their advice made our situation seem pretty bleak. I couldn't open the cage to try to get the carrier out because that might allow the queen bee to escape or cause her to be damaged in some way in the process. I couldn't achieve anything by killing the carrier because the varroa would just move to one of the other bees- maybe even the queen- because they're all going to be contained in that cage for the next 3-5 days. So what to do?

The general consensus was that I should try to stab the bee through the varroa with a pin to try to neutralize the threat. That got me thinking... what if I could actually knock the varroa off the bee with a pin instead of getting stabby? Then maybe the bee wouldn't have to die.

So I tried it. 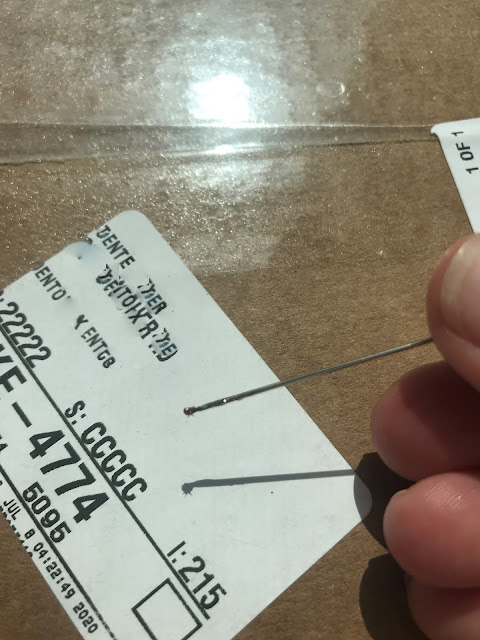 And I didn't hurt the bee.

And when I sent this photo and story to my fellow beeks, they all said I was crazy.

Posted by Courtney at 8:11 AM No comments: 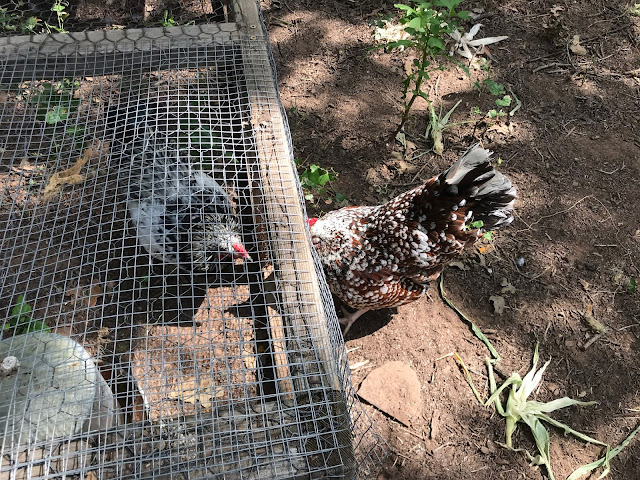 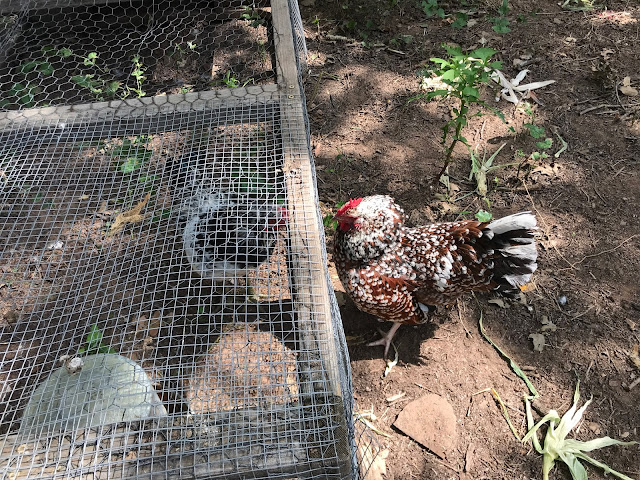 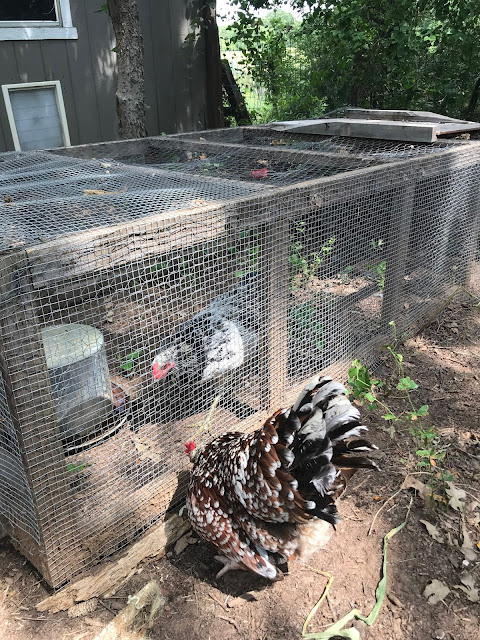 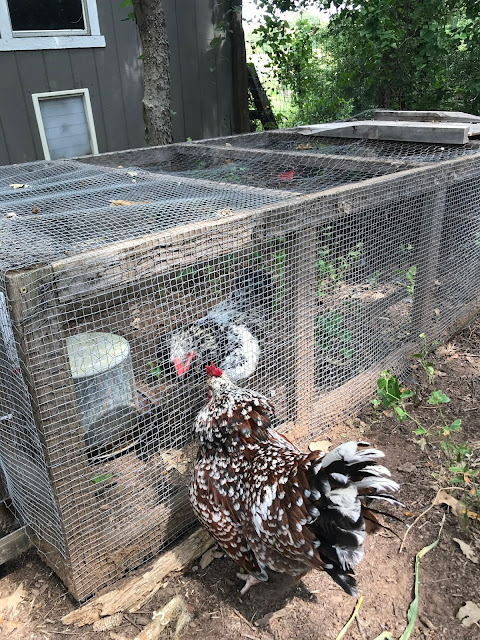 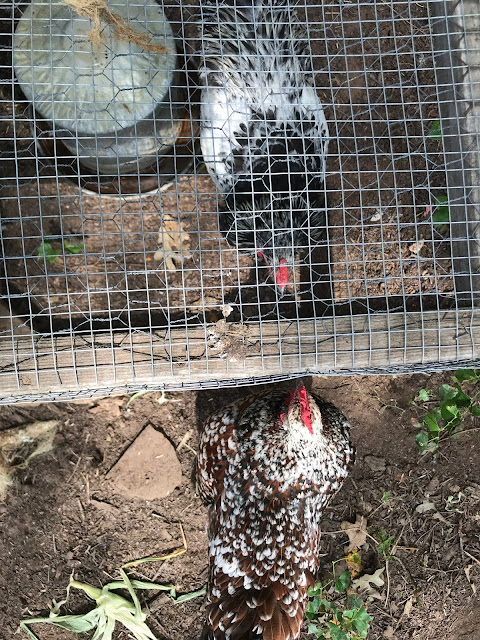 We've gotten our ladies another rooster (this one will be number four), this time a "rescue" rooster that was working as a therapy chicken... until he started crowing. He's an Easter-egger who comes to us already strutting the name RooPaul (love). He's very young and not totally full-grown yet, but he's already taller than all the others, and after his mandatory quarantine he had no trouble straightening out the pecking order to his liking.

Paprika, however, did not like him... at least at first.

I think they've become more comfortable with each other, though. They've at least learned to leave each other alone anyway.

I have to say, we didn't realize how much we missed having that quintessential rooster crow as part of our home soundtrack. I'm enjoying our new chicken boy. He's still a little skeptical about me. 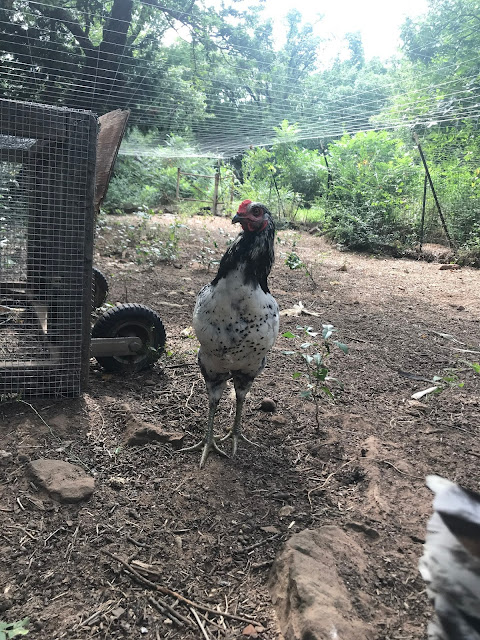 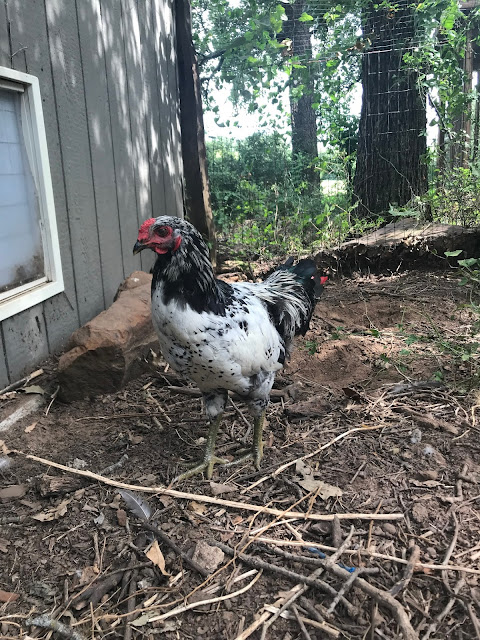 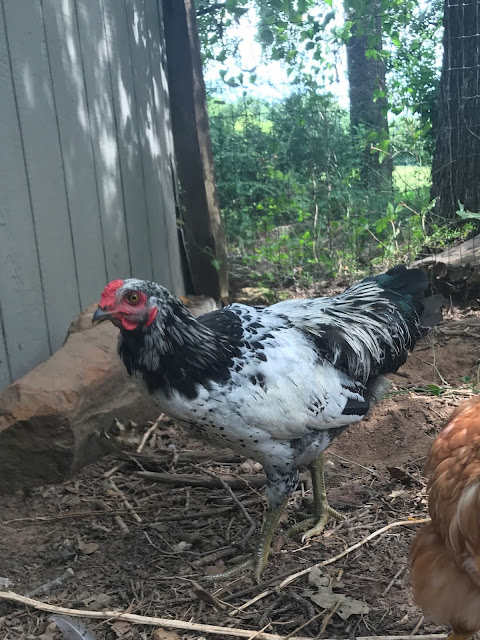 Welcome to the flock, Roo!
Posted by Courtney at 3:51 PM No comments: 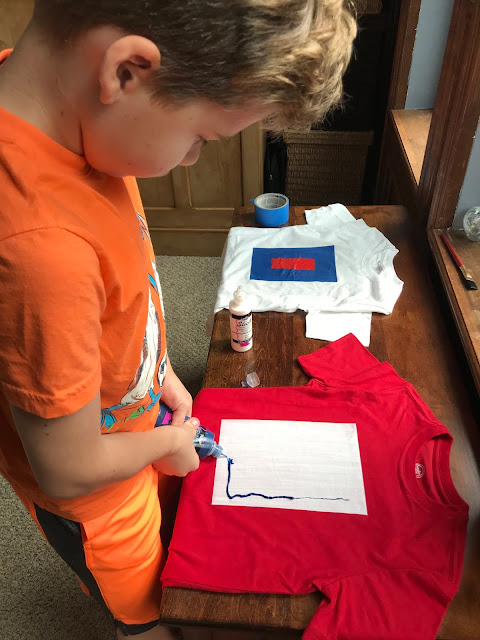 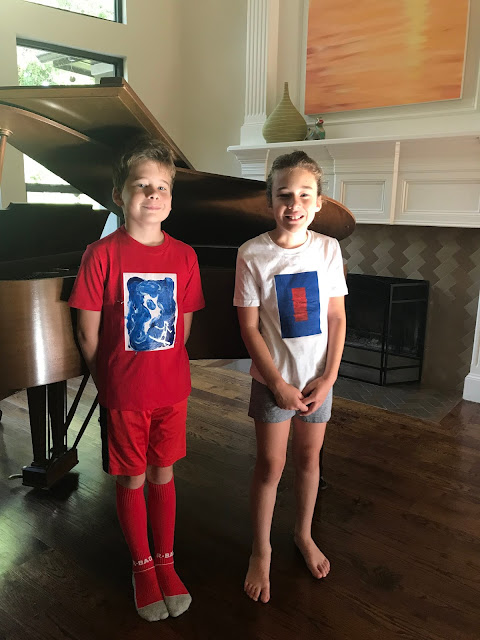 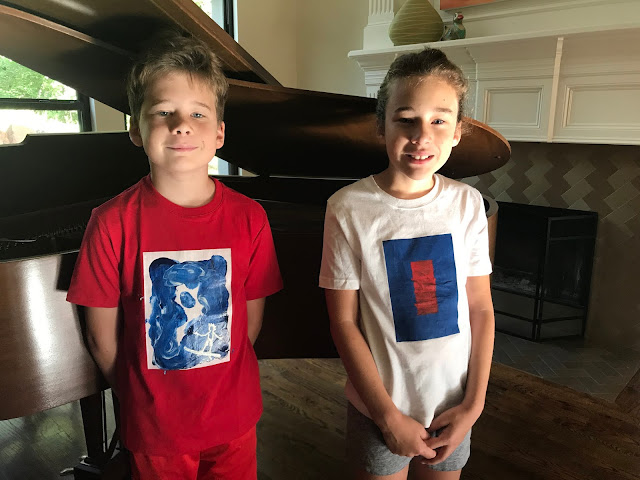 Red, white, and blue, poppers and sunblock and pool noodles, corn-on-the-cob, burgers and fresh tomatoes out of the garden... we may be rounding the corner on the hottest of days, but there are still some pretty great things to look forward to! Happy July!
Posted by Courtney at 3:34 PM No comments: