Fair warning: The following post is heavy on the bee-talk, mostly for my future reference, so if you have no interest in the nitty-gritty of my beekeeping journey, I'll never know if you skip this one! 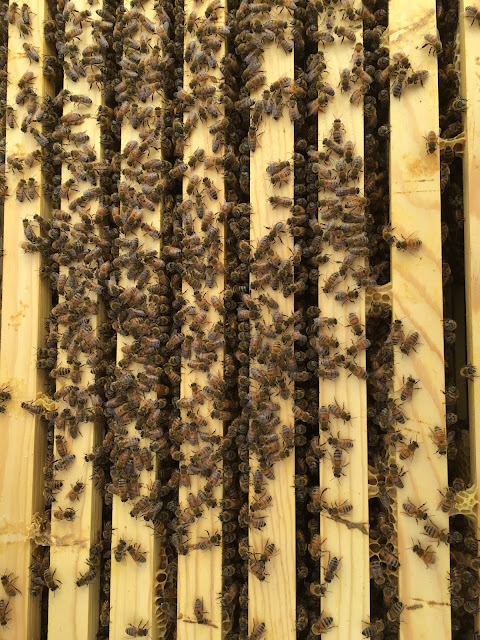 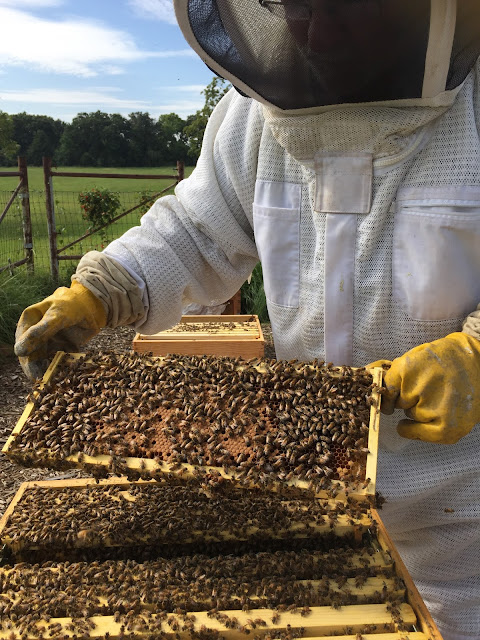 My beekeeping mentor swung by yesterday and we went through my hives for my first thorough fall hive inspection. We have taken to referring to our three hives after the farms in our beloved 'Noisy Village' book collection- we have North Hive, Middle Hive, and South Hive.

North Hive and South Hive came from the nucs I bought in May, and Middle Hive is the feral hive I took out of a tree over the summer. I've been most worried about Middle Hive, because they have been so slow to pull wax, and at my last hive inspection they had almost no stored honey in their single deep brood box.

We worked from south to north checking on the girls, and overall I was completely surprised at how well they're doing!

Since my last hive inspection I'm happy to say that South Hive has continued to steadily grow in population, and there is a much more stable and consistent brood pattern. I've been inconsistently feeding them sugar water, but after this inspection I'm doubling down and making sure their feeder stays full and fresh until we get our first freeze. I've also ordered pollen substitute for all the hives, as the guest speaker at the last beekeepers' meeting stressed that now is the time to encourage "explosive growth" to prep the bees for winter. I'm on it.

Middle Hive was way better off than I'd thought. The brood pattern in that hive was amazing... probably the best out of all three (God save that queen!). They were storing nectar and sugar water pretty well, and their population was definitely better than the last time I looked in on them. However they still haven't filled out their brood box, and there were a lot of empty frames in there, so we decided to intervene...

We saved North Hive- the strongest hive by far- for last, and had to smoke the you-know-what out of them to be able to open them up. They were positively overflowing with bees. I never put a queen excluder on them during the honey flow because I never intended on harvesting honey this first year, so I have brood throughout all three boxes. We took three frames of brood out of North Hive and put them into Middle Hive to give them a boost and hopefully rocket them into preparedness for winter. We then filled the void with empty frames and finished our inspection. Oddly enough, the strong hive was the only hive where we found pests- there was a small hive beetle (SHB) that scurried for the shadows when we first opened the lid, and upon accidentally breaking some burr comb that contained brood, we found a varroa mite on one of the exposed larvae. However we spotted a handful of drones with no varroa at all, so at first glance it does not appear like an infestation.

After spotting the varroa mite, we opened all three hives back up and dusted everyone with powdered sugar (which encourages grooming behavior, thus significantly increasing the chances of varroa being picked off and dropped out of the hive). I'll check back in on them in about a week and probably dust them all again.

I'll also be picking up some Swiffer-like disposable mopping pads soon to help with any SHB's that are roaming the hives (the beetles have barbs on their legs which will terminally entangle them in the fibers of the Swiffer pad, thus allowing the beekeeper to cull the population without chemicals... I've seen it done, it works!). 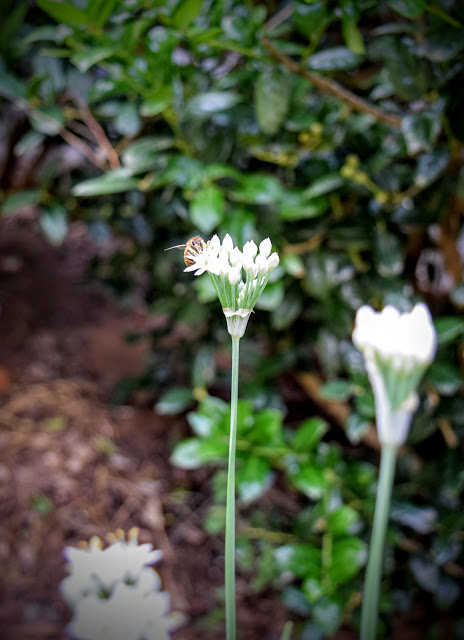 It feels like such a relief to have that first major seasonal hive inspection accomplished. I feel good about where they are at this point, I have a manageable to-do list for the next month or so, and they all have a pretty fair chance of pulling through this coming winter (especially if it ends up being as mild as they're saying!). Plus we've got blooming fall flowers all around us, and those girls are on it!

This "newbee" is a happy camper.
Posted by Courtney at 9:03 AM