Yesterday I visited my garden for the first time since the rain moved through (it's been a couple days), and aside from the weeds beginning to grow in the pathways and the copious amounts of squash bugs, stink bugs, and harlequin beetles on everything, I'm happy to say my plants are doing surprisingly well! In fact, I might need to plan on taking some pictures pre-'real' summer heat so I can remember what was where, what was doing well, and what I want to change next year!

Anyway once I got out there and started looking around, I realized pretty quickly things were getting out of hand. I had cherry tomatoes everywhere, a few of the larger varieties had tomatoes about to crack from all the rain, there were six eggplant ready to come in, and there were zucchini longer than my forearm. I had to make two trips to unload my harvest basket when I started bringing it all in. 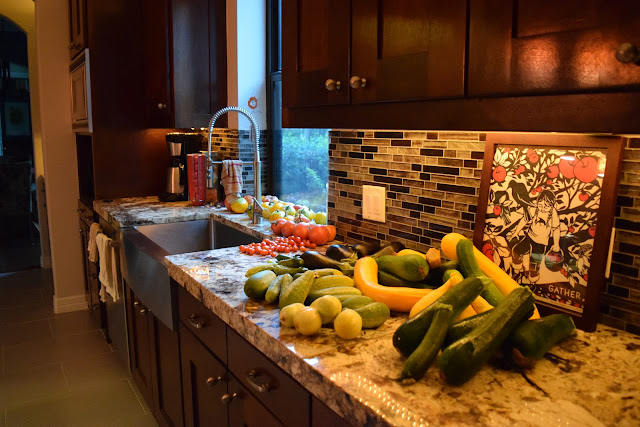 ...so this morning I made a plan, made a list, made a trip to the store to stock up on supplies, and then made a go at it. 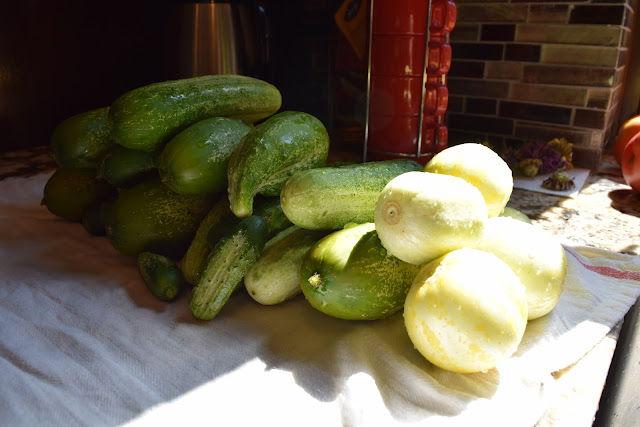 First, we tackled the cucumbers and got most of them into a crock to ferment into sour garlic-dill pickles. To cater to our need for immediacy, we also put two quarts of refrigerator pickles up while we were at it. I'm guessing we had close to 7 or 8 pounds of cukes (but of course I didn't think to weigh anything before it was all said and done). While we had our fermentation stuff out, we also got a jar of banana peppers and a jar of sliced jalapenos going. 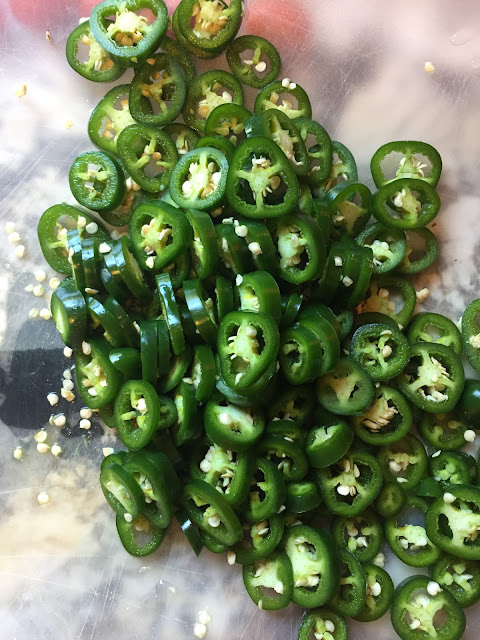 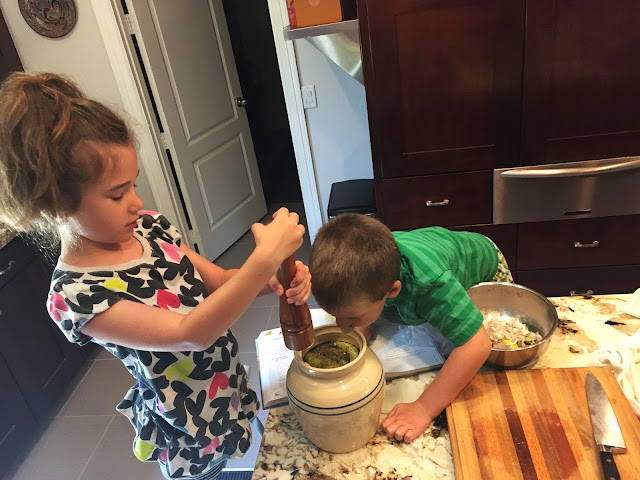 Next we chopped up all the eggplant and about half the squash and sauteed it together with a couple big onions in butter and olive oil until it was cooked down into sweet caramelized mush. I then divided it into two gallon-sized freezer bags, vacuum-sealed them, and put them on a cookie sheet in the freezer to freeze flat and await their chance to be a killer pasta sauce (with the help of a little heavy cream and Parmesan cheese). 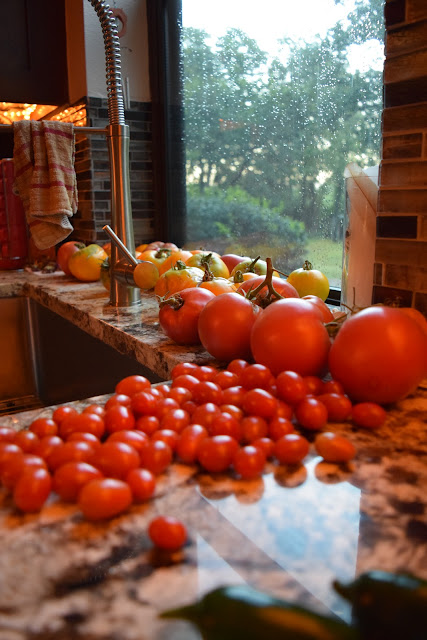 From there we put the last four pounds of blackberries on with an embarrassing amount of sugar and a little lemon juice for good measure to bubble and reduce into jam, and while that was working we launched into the tomatoes. I decided for the sake of time just to peel them, half them, cram them in jars, and process them in their own juices. I got six quarts out of what was sitting on my windowsill. I've never canned tomatoes like that before, so I hope I made the right call. I'm hoping they'll be versatile enough in this way that they can be salsa or tomato sauce or soup or bloody marys or...

The last thing we tackled was our grocery bag full of Chinese red noodle beans. Oh my gosh these beans are my new favorite. They were so heavy with aphids when they first started growing I didn't think they'd make it, but wow have they pulled through! They're just the coolest ever. I would highly recommend them, and am totally keeping a place for them in all my future gardens. My kids think they look like alien fingers hanging down from their trellis. And they taste good. And they stay purple when you cook them. 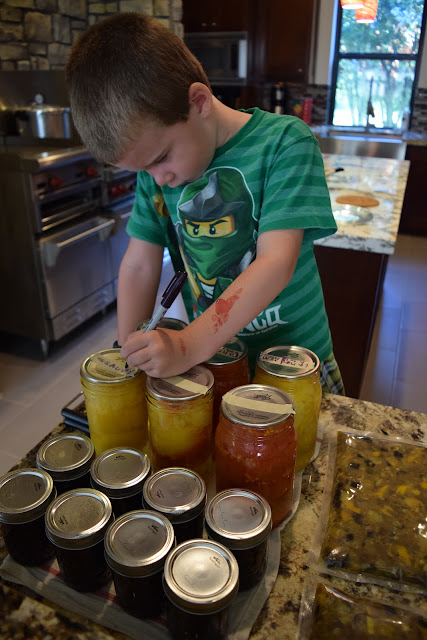 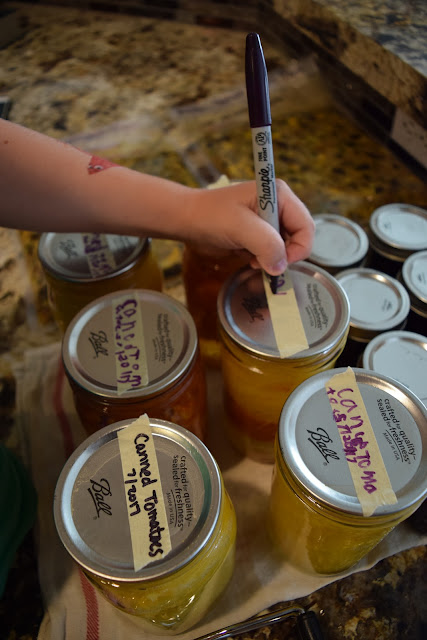 Once everything was processed and cooled, we labeled and stacked our jarred hard work in our pantry, and that my friends is the best feeling! That and air conditioning. I have no idea how families in the past put up their summer harvests in open-air kitchens. Mad respect.

Oh I almost forgot- one more thing came in from the garden today... 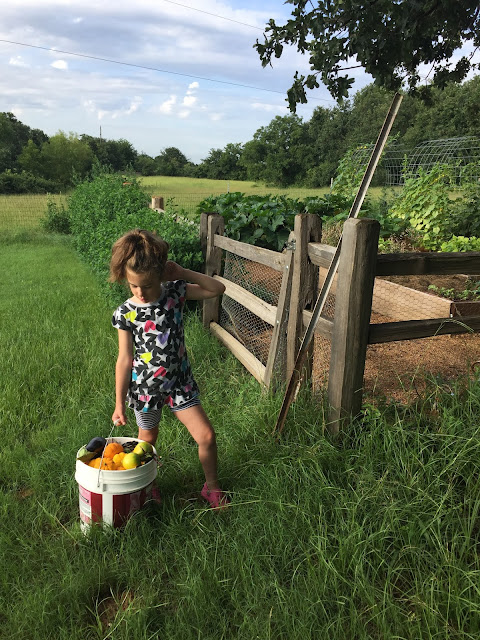 ...41 mini pumpkins! I've moaned and groaned about never successfully growing my own pumpkin vine multiple times I know, and now lo and behold a volunteer springs up in my garden pathway and produces those little things out the wazoo! I did some desperate research about these "ornamental" squash once I figured out this plant wasn't going to die, and everything I've found says they're just as good to eat as pie pumpkins, they're just more work because they're so small and seedy. Welp, they're as good as I'm going to get, so in they came today and we got to work on those, too! 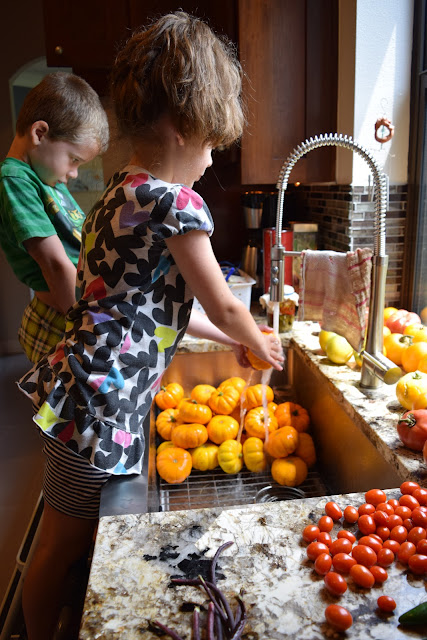 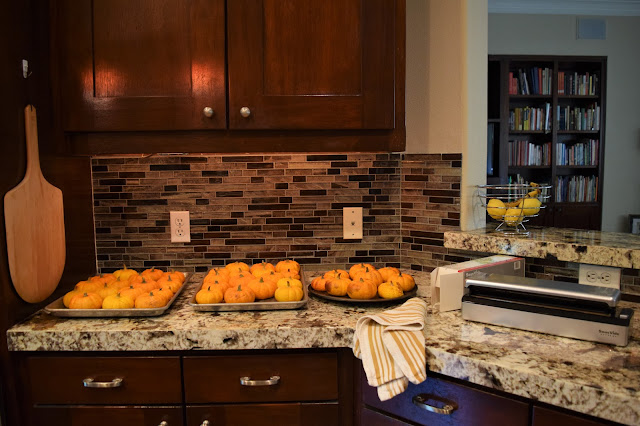 These little ladies were roasted whole, and on my counter top they still sit because I just plain ran out of energy. My plan is to peel them and put them through my food mill to rid them of their insane amount of seeds, then I'll freeze them in vacuum-sealed freezer bags in pie-appropriate amounts. That's my plan, anyway. I've been told my mom's grape vines and pear trees are loaded and ready right now, so a new wave of attention-demanding summer goodies may soon be upon us. Maybe I can tackle these pumpkins over coffee in the morning...?

Oh the joy of a summer garden! How I've missed it, how we're loving it! While helping, almost under his breath, Henry said, "Thanks for everything, garden!"

Thankful doesn't even begin to describe it.
Posted by Courtney at 10:17 PM