We started Henry on a schedule today. We are a loosly-followed BabyWise family, and we sleep-trained Audrey based on (most of) the BabyWise principles. The method can be compared to a staircase, where you start at the bottom and slowly step up, one step at a time, until you arrive at the top, which is a sleep-trained baby or toddler. We took the first step today, which the book calls "stabilization." We are basically just getting Henry used to the daily rhythm of sleeping, eating, being awake, then sleeping, eating, and being awake, etc.

It is so easy to get in to the rhythm of feeding a baby to make them sleepy, then putting them down while holding your breath, tip-toeing out of the room, and inevitably rushing to their aid 30 minutes later when they wake back up crying, again, for yet another feeding to quiet them down and put them back to sleep. We were sliding down that slippery slope ourselves, which was getting to be a real pill since I'm the only one who can feed him right now. Well, enough is enough. The hardest part is the first couple steps, and we're standing on the first one.

He seems perfectly capable of a 3-hour schedule right now, and we've actually had to work the hardest to wake him up on time to feed when he's supposed to today. His first two naps of the morning were really easy, and we're on to the third and the first session of 'CIO,' or crying it out. Even though we've gone through this process with one kiddo already, it still sucks to sit there and listen to your baby cry and cry. The important thing I keep reminding myself of is this: all his needs are met. He's clean. He's better than fed. He's not too hot or too cold, and he got all his air bubbles out before he went down. He's tired, and he's used to falling asleep while eating, so he needs some time to learn how to soothe himself. That's all. We'll get past this first step, and he'll be so much better for it.

In the meantime, the predictability of a new schedule blooming has afforded me some quality time with the sweet big sister that's been so often left to herself since Baby Brother joined the family. We dabbled in the stabilization process yesterday afternoon, and during that first nap, we got to go outside, just the two of us, and play in the garden for almost an hour. It is such a joy to reframe and get a breath of fresh air and a new perspective of the world from the eyes of such a curious, innocent toddler. Among other things, we found wonder and amazement in the many spring butterflies floating in the breeze, the weeds that managed to grow up between the rocks in the pathways of the garden, and the freshly-filled bird bath. We ended our garden reprieve picking green beans and lettuce for dinner. It was a great afternoon... for both of us. 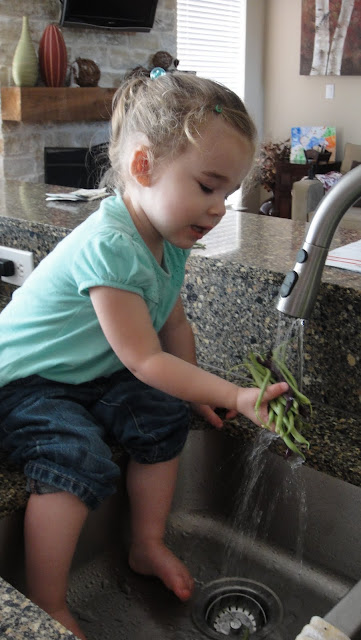 Email ThisBlogThis!Share to TwitterShare to FacebookShare to Pinterest
Labels: Gardening, Thinking Out Loud