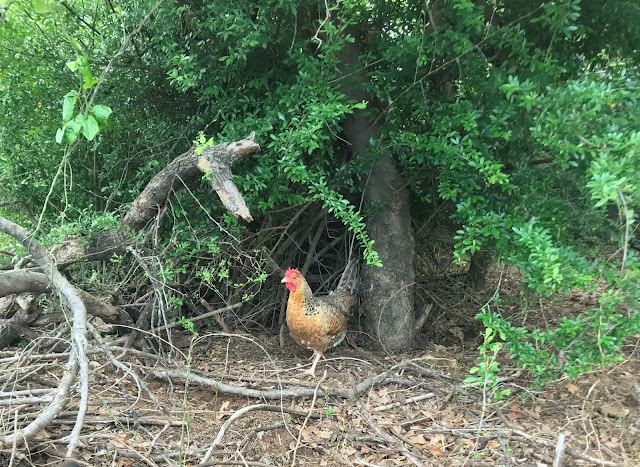 This afternoon, as I was working around the house with a few windows open here and there, I heard loud chicken protests coming from the front yard. Right as it was registering that chickens shouldn't even be in the front yard, I heard Henry yelling at the top of his lungs, "Suka! No! Noooooo! Suka!" When I made it to the kitchen window to see WTF, I saw Henry running after Suka, who was running down the driveway with a chicken in her mouth.

So I flew out the door as soon as I could slip on my shoes and eventually got Suka to turn around and come back. It was a bit of a struggle to get the chicken out of her mouth- and keep it that way- but I was able to separate them and bring the chicken inside for inspection and observation. I knew as soon as I looked at her that it was Beauty, one of the kids' favorite chicken girls. She was in shock, and in between her attempts to bite me she managed to make some of the loudest, strangest bock-scream sounds I think I've ever heard. I stuck her in the cat carrier with some water and turned the light off to try to calm her down.

After about 10 minutes she was quiet, and about ten minutes after that she was drinking and pecking at the sides of the crate. I couldn't see any blood or evidence of any true injury, and she wasn't limping or having trouble moving, so I decided she'd be better off rejoining her flock... so out I took her to the coop, and she tried to bite me the whole way out there. Which was weird. But I decided she was still freaked out about her ordeal and I shrugged off the beaky insults.

I put her in the coop through the nesting boxes so she could hang out in the hen house if she needed a little extra time... and then I stood back and waited to see how she'd do.

And that's when I noticed Beauty.

Hanging out with the other chickens, cool as a cucumber, already in the coop.

This chicken girl wasn't Beauty. In fact, she wasn't one of my girls at all.

Right about the time I realized that this girl was a stranger, she laid an egg and marched right out of the hen house squawking at the top of her lungs with her tail straight up in the air and her head held high.

I'm not sure where she came from, but she's a survivor, and she's a diva, and she is now Beyoncé and part of our flock (and we all have Destiny's Child's song 'Survivor' stuck in our heads).

Welcome to the fam, Bey!
Posted by Courtney at 9:12 PM