What to do with Prickly Pears 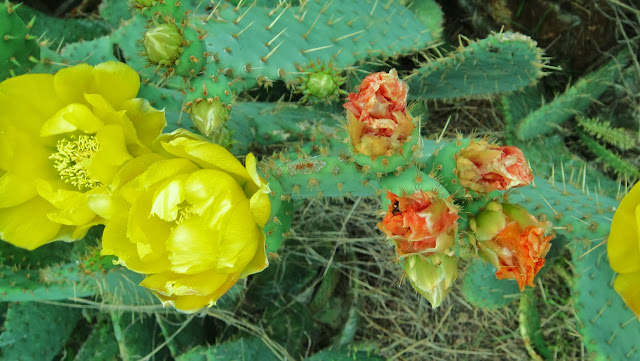 My parents have a gigantic prickly pear cactus (aka paddle cactus, where nopales come from) growing in/on their "compost pile."

This year, it's also covered in prickly pears... and my mom doesn't want to deal with them this time around.

So I grabbed me some. Well, as many as I could before the skies opened up and poured down rain, halting my foragers' harvest.

I got enough for a little something, though, and if you have access to these "desert pears," too, you might be wondering just what to do with 'em. Here's what I'd do:

Once you have yourself a few cups of prickly pear juice, the possibilities are nearly endless! You can make jelly (though I've had particular difficulty getting prickly pear jelly to gel... though I've used a failed jelly as a sorbet in my ice cream maker and it was amazing, once I got over how much sugar was in it). You can make prickly pear lemonade or prickly pear mimosas. How about a prickly pear granita? I was only able to collect about 2 cups of juice from the pears I brought home this time around, but it'll make for a fun cocktail hour this weekend.

In the past, I have found success making prickly pear marmalade, as the pectin in oranges helps set the prickly pear part of the concoction. I would have loved it if I'd cut the oranges thin enough (think paper thin!). I've also tossed raw prickly pears (peeled, seeded) into salads along with other things for their tartness, and it wasn't bad, but it's true about the texture- spongy and slimy. However, prickly pears and strawberries go brilliantly together, and if you mix them 50/50 with strawberries, you can make an amazing crumble or pie, but again it's labor intensive as you have to peel and seed each one.

SO for me juice it is, and juice it will probably be in the foreseeable future if I go back for round two with my parents' plant, that is if the weather holds.

Does anyone know if prickly pear juice pairs well with tequila...?

Email ThisBlogThis!Share to TwitterShare to FacebookShare to Pinterest
Labels: Recipes