If it's one thing I love around here, it's instant gratification. What better way to feel that immediate pat-on-the-shoulder feeling than to refinish an old, treasured, yet abused and ugly piece of furniture? Point in case: Audrey's little wardrobe, which was mine, and my mom's before me. 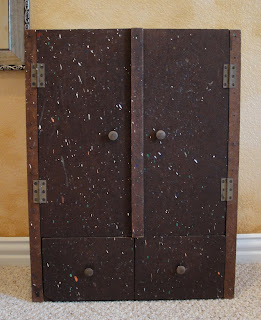 This poor little guy was hand made by a favorite uncle, and it spent a huge part of it's early years as a staple in an attic space made up like a playhouse with my mom and her three sisters in a cabin in Minnesota. It then moved around the country with them, following my grandpa in his post-WWII traveling salesman career, until it landed in the basement of their retirement home in Missouri. On a visit in the early years of my childhood, it was reclaimed, and it became an important piece in my room until I was practically in high school.

Once I lost the need for a micro-wardrobe, it moved out to my mom's art studio, where she went through a Pollock phase, and it suffered the ramifications... and there it sat. Then, in designing my daughter's toddler room in the style of Scandinavian peasant home, I realized this little gem was still out there somewhere, and I set out to reclaim it. In all it's mistreated glory, it graced my home once more, though quite worse for the wear. Refinishing it was on my to-do list, but not exactly at the top... until today.

Today, with 'Italian Olive' flat acrylic paint, a cheap yet oh-so-perfect stencil, and a small tube of crimson, this little wardrobe finally got what was coming to it... a little TLC and another generation completely wrapped up in it's mini-magic. 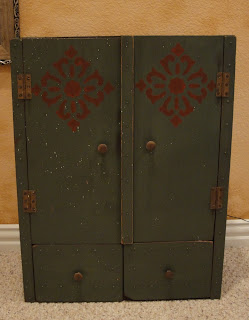 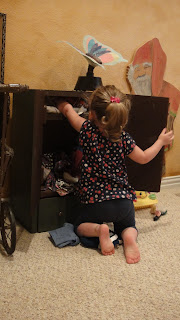 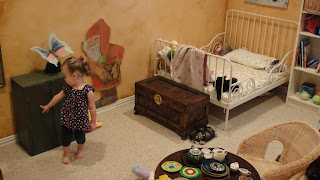 Email ThisBlogThis!Share to TwitterShare to FacebookShare to Pinterest
Labels: Art and Crafts, Before and After, Home