It seems like each day passes so slowly, then all of the sudden it's Thursday, and then it's August... I can't believe Audrey will be 10 months old on Monday. Holy. Crap.

Yesterday, I swear she said 'Hi,' but I couldn't get her to do it again, so I decided it was a babble coincidence. This morning, when we were feeding the fish, she pointed at the aquarium and I SWEAR she said 'Hi' again! I just can't tell if it's purposeful or not, or if I'm hearing things... I am now having to keep myself from saying 'hi' constantly! Thankfully, she provides plenty of distraction. Her most recent look-what-I-can-do is climbing the stairs (all the way to the top!) as fast as she can go (I have a video I've been trying to upload all day, but it just won't cooperate, so you'll have to use your imagination).

On a different note, Mimmy and Pappy (aka Jan and Ron) added our first coral to our aquarium for my birthday, and although wee, it's quite neat. It's a toadstool leather, named for it's appearance when closed up (it looks like a mushroom) and it's texture (feels like leather). It opened up around the third hour after I placed it in the tank, then a crab picked at it and it's been closed ever since. I'm hoping we'll get to see it's "dreadlocks" again soon- it looks so cool open! 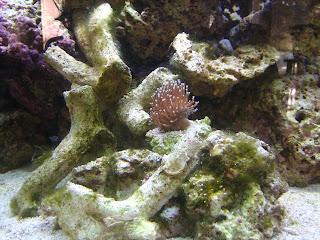 Email ThisBlogThis!Share to TwitterShare to FacebookShare to Pinterest
Labels: Hobbies