The summer has flown by... and with it my vow to post in this space more frequently! Alas, my attempt to balance working from home with friends and swimming and company and pets and chores left little room for me to sit and process it all. However, there were moments when I managed enough lucidity to snap a quick picture or make a mental note, knowing eventually I'd make it back in here to share them...

1. Soccer Games: Henry's soccer games are now firmly rooted in our weekends through October, and if you go looking for us on any one of those Saturday mornings you'll find us at the soccer fields. This last game his team actually won (3-2), but it was so dang hot he was kinda sick afterwards. He played really well, though, and he was eventually able to eat an entire hamburger with cheese, fries, and a Sprite, so we're pretty sure he made a full recovery. 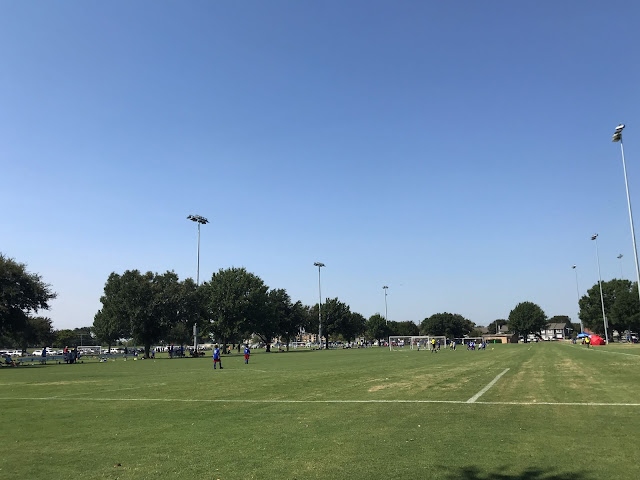 2. Friday Nights: We've frequently been finding ourselves at a friend's house on Friday nights, sharing food and drinks and decompressing from the week together. My kiddos are totally smitten with their whole family, but a certain Big Sister is particularly smitten with a certain Middle Brother, and it has been a hoot to watch her navigate her first real crush. He's a good sport about it, too. 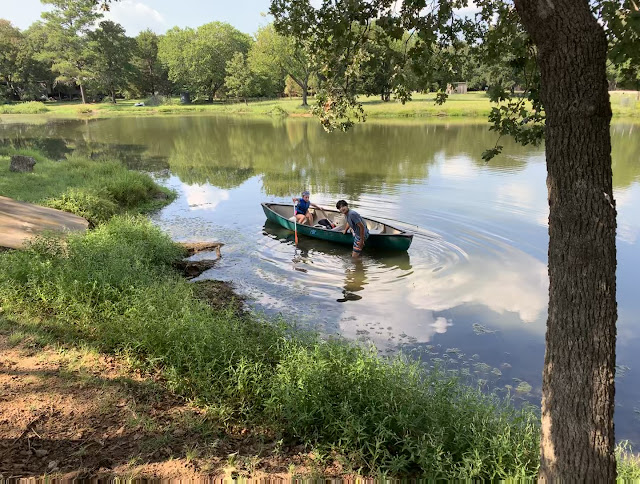 3. Henry's Drums: This summer Henry turned a corner in his drumming and has seemingly quadrupled the amount of time he spends playing. He runs up there right after school to work through some grooves, he pauses in the mornings to work on a drum roll, and he's been keenly listening to favorite songs on the radio and in our frequented playlists to bring to his lessons and dissect with his instructor. Right now he's pretty much got down to perfection Hotel California, Toto's Africa, the first part of Journey's Don't Stop Believin', and a slowed-down version of the Foo Fighter's Pretender. He's really focused on the Journey song, though, because he recently discovered he has a friend who plays the piano and a friend who plays the guitar, and both know the song from beginning to end. There may be a band forming over here, just sayin'... 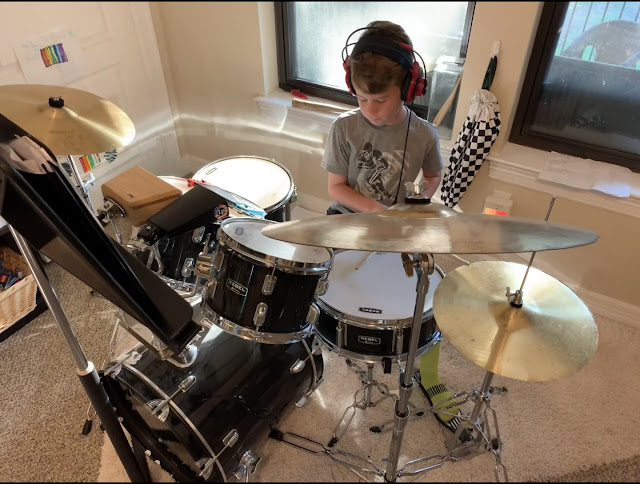 4. Bees: Our three hives pulled through the summer honey harvest and are currently in the home stretch of a varroa treatment. I'm only having to feed one hive (North Hive, the smallest of the three), and I'm cautiously optimistic about the oncoming season change. In other bee-related news, we have an awesome new Communications Director on the board of our local bee club now, and he has started posting some really, really great photos on our new club Instagram page. Audrey and Henry have even made a few appearances. You should check it out: @dentonbees. 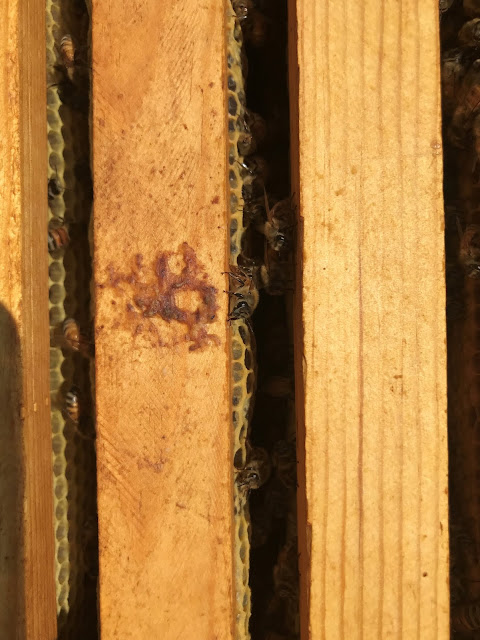 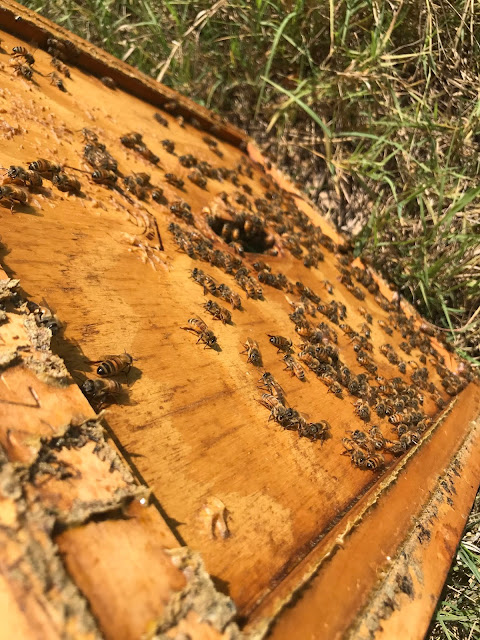 5. New Responsibilities: This summer has also seen Audrey in particular really step up and start inserting herself into everyday things in a more meaningful way. She's been helping with dinner, helping with outside chores, helping (more) with the animals, and recently she learned how to pump gas! It has really punctuated how much she's growing up... it's hitting me pretty hard right now. 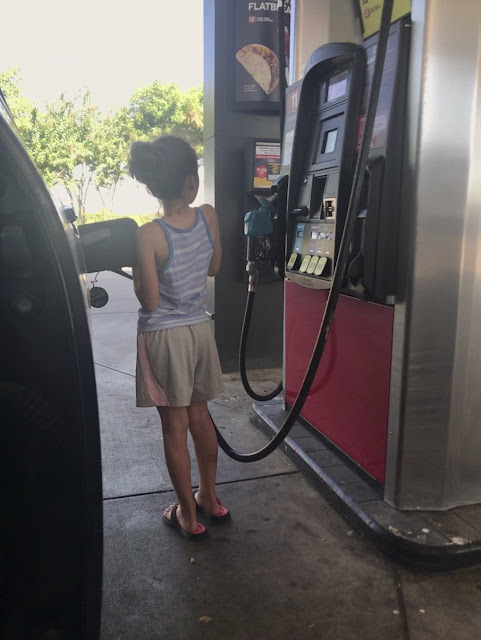 6. Daddy's Birthday: Daddy celebrated another trip around the sun here recently, and knowing he'd cheekily request a baked Alaska if we asked he what he wanted, we decided just to make him one. We made it a cookies & cream baked Alaska, complete with crumbled cookies between the ice cream and the cake layers. Audrey made the meringue and Henry lit the candle. It turned out great. We then gifted him some art for his office, and Henry gave him a ticket to a special drum solo. By all accounts it was a good day. 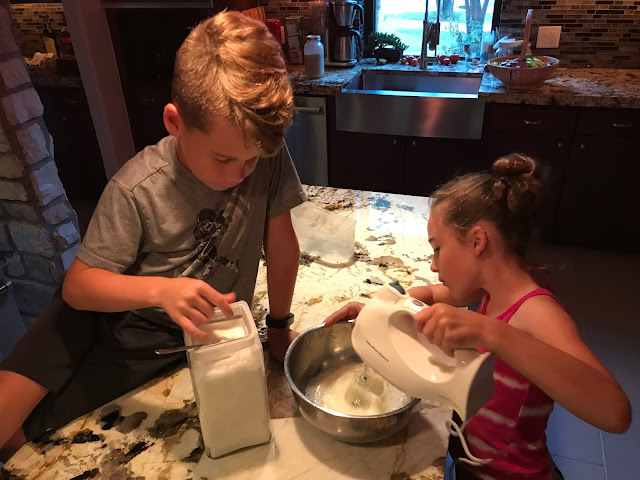 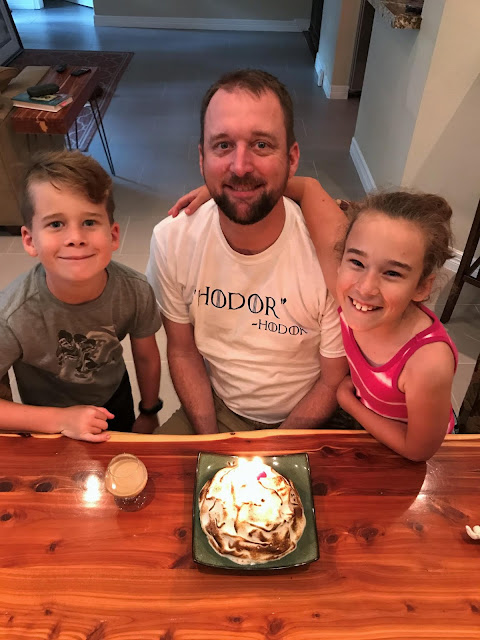 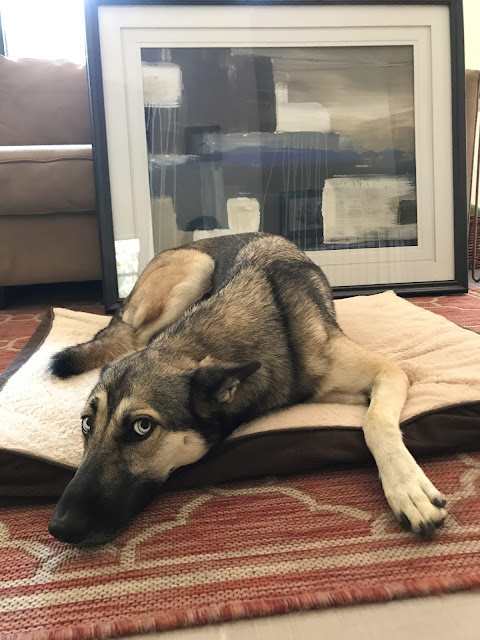 7. Weeds: This summer has been unusually green, and along with a really awesome hay cutting at our place (we got 21 round bales in a single cutting!), some weird plants have made a reappearance at my parent's place that were there when they first moved in and have mystified us for years. My little bro and I used to call them "bean pod plants" because they would make these beans that looked like smooth-skinned edamame and would pop like bubble wrap. Seeing them come back up again in my parent's field made me feel kinda nostalgic and renewed my curiosity about exactly what they are... and we finally figured it out! Glottidium vesicarium, aka bagpod- a legume and NOT a Harry Potter curse- is what my bro and I turned in to fishing poles, pretend cooking ingredients, and would pick and pop at each other when we were practically Audrey and Henry's ages. The funny thing is I never remember noticing that the plant produced flowers, but look how pretty they are! 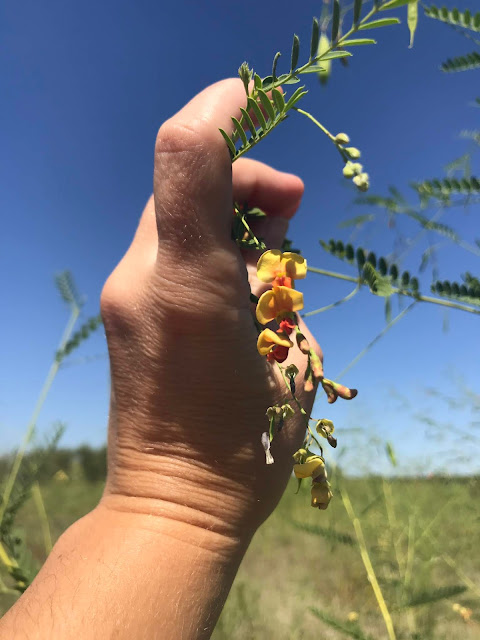 8. Puttin' Up: Though I managed to miss blackberry season and most of my mom's pears were turned into cobbler or perry, I didn't sit out the harvest this year entirely. I was able to put away a few new strings of dried chilies, dehydrate a bunch of sweet peppers for that ground pepper powder I love so well, and I totally scored some huge cabbages at the grocery store that I made into sauerkraut this past weekend. My laundry room now smells like the worst kind of flatulence, but it is easy to overlook when you know there will be 'kraut in the end! 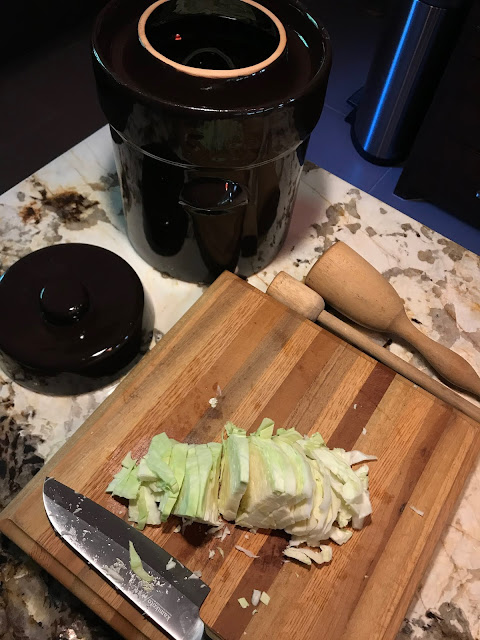 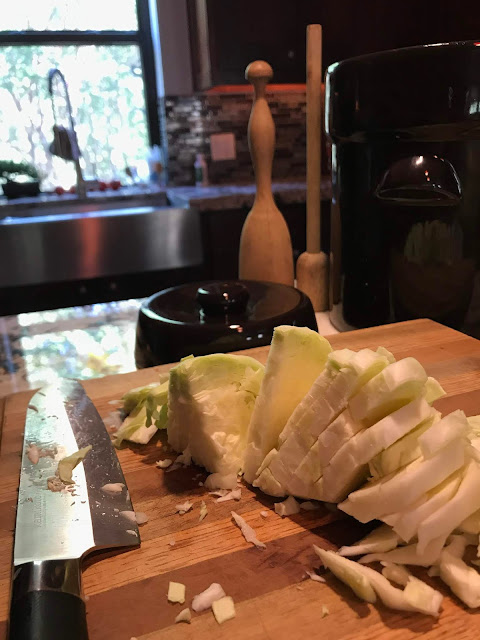 9. Inside vs. Outside: Through increased social awareness and the influence of peers, my kiddos have come to prefer sitting inside in front of a screen to almost any other pastime, and this shift became extremely evident this summer. It has been quite a struggle for me to accept that they now prefer Minecraft over digging in dirt or making art or working with dough... all that stuff my little Littles filled their days with. I found myself outside alone a lot this summer, despite the fact that we limited their time on devices and made them earn it. Don't get me wrong, they did do a variety of things this summer, but if given the choice they would choose video games over anything else hands-down. It's been kinda a bummer for me to get to a point of acceptance with this one. I still want them to want to do the things with me that they used to love. 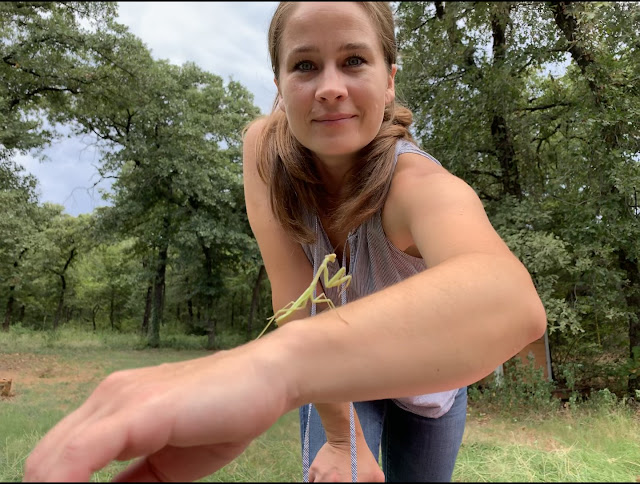 10. The Overflow: The most recent newsworthy event around these parts is the waterfall that fell from around the vent hood opening over the oven this week, a result of an overflowed toilet upstairs that a certain little brother neglected to mention. It was one of those Murphy's Law scenarios- a minor clog with a jammed stopper and no one nearby to notice until it was too late... but thankfully it wasn't a worst-case scenario because I was in the kitchen when it started making it's way downstairs, and the water only came out around the vent, so the drywall remained mostly OK. You better believe I put in overtime bleaching everything and then some, though! Ugh. 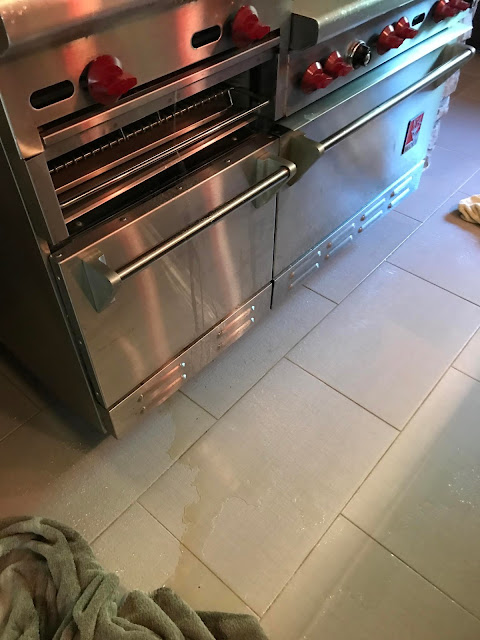 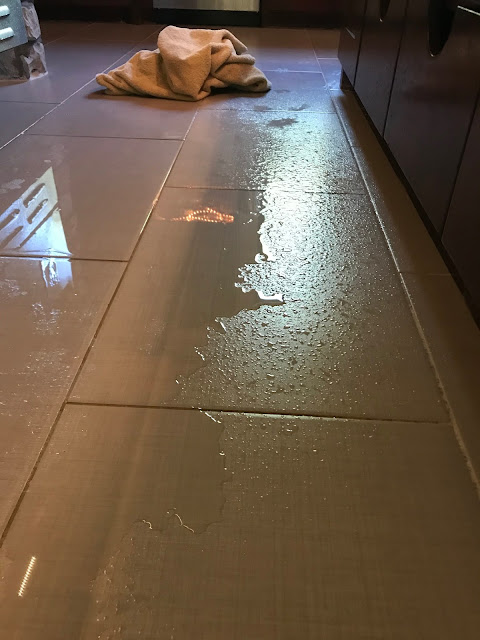 So that's what's been going on here and there and everywhere- our little moments squeezed into and out of the slack between working, school, and the few hours of sleep here and there that we can find. I'm dangerously close to becoming one of those insufferable people who is busy all. the. time. and can't talk about anything else except the errands, classes, practices and games they have to haul their butts to every evening and weekend... but I'm trying my best to find the balance, the negative space between the business, the calm on the other side of the chaos.